Quickly an icon with racers and street drivers alike, the Shelby GT350 was a beacon of American ingenuity and performance wrapped into a streetable package. Highly competent on both the road and track, the GT350 quickly gathered a following of performance-minded individuals looking to have a muscle car with the duality of a streetcar that could also perform on the track. With the introduction of the 1966 model year GT350, the cars were offered with more options that finally allowed owners to customize and make their cars tailored to their individual tastes while increasing comfort. This included rear quarter windows, rear seats, functional rear brake ducts, etc. With its winning approach of being a high-performance muscle that you could live with every day, the ’66 GT350 found a large amount of success that easily outsold the ’65.

Second only to Shelby America in helping the image of the GT350, Hertz Car Rentals famously purchased 1,000 GT350s (dubbed the GT350H, or Hertz) to rent to the general public. Originally with all 1,000 units destined to be painted black with gold stripes, 61 cars were painted red, 50 blue, 50 green, and 50 white cars were delivered to the Hertz company. They became known as “rent-a-racer” and were often spotted at local racetracks. It was fairly common for renters to keep GT350s long enough to do engine swaps, removing the Hi-Po engines and swapping them with regular Mustangs. This fact alone makes it incredibly rare for a GT350H to have its original matching numbers engine, which this GT350H does.

This GT350H was shipped to Trudell Ford, Inc. of Warren, Michigan on 2/18/66 for dealer prep before being delivered to Hertz. The final invoice price was $3,788.34. It was used as a Hertz rental for the beginning of its history before its first recorded owner, Dennis Morris of Wichita, KS, purchased the car who later moved to California. The car remained in California from Dennis Morris’s ownership and had a few different owners through the end of the later 1990s. Tony Conover, a noted marque specialist, did a complete rotisserie restoration on the GT350H, done to concours-level standards with excellent craftsmanship throughout 2009/2010. Once completed, this rare GT350H was chosen to be featured in Mustang & Ford magazine. It still retains its original Hertz magnum wheels, Cobra tachometer, competition seat belts, and more.

Upon arriving at Canepa, the Shelby was given a thorough inspection from front to back. Bruce Canepa, being a fan of GT350s with their factory hot rod nature, noted that it was an excellent restoration and a worthy GT350 to receive such a restoration. With a Hertz-edition already being a rare car, it is even more so that it is one of 61 cars that were originally painted red. The car was given a full mechanical inspection and service before receiving a concours-level detailing. The underside of the car was detailed along with the rest of the car, completed by the red paint finish receiving a full foam pad polishing to give it a showroom-worthy luster shine. With its driving dynamics dialed in and cosmetics in excellent shape, this is an incredible opportunity to enjoy an incredibly rare GT350 Hertz that still is powered by its original matching engine. 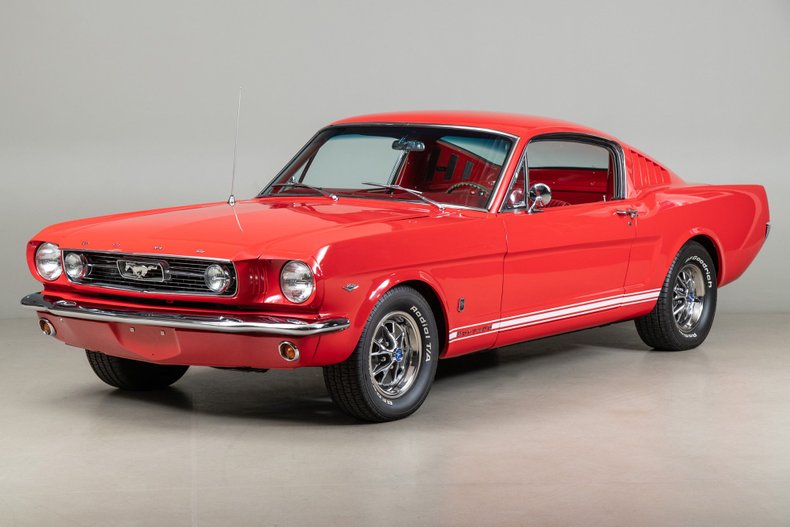