“30 years ago I had the chance to design and build the world’s greatest car. The result… The McLaren F1.

This single-minded, focused design process has not happened since.

Once again, I am designing a supercar which I believe will re-write the rulebook.

T.50 will almost certainly be the last great analogue supercar.”

The T.50 is Gordon Murray’s answer to the supercars of the modern era. With so many compromising systems that have been developed in the name of speed, many supercars have lost a direct connectivity to the driver which was the highpoint of experiencing a supercar. Cars have become bloated and heavy, taking away the raw and relentless power and handling that more analog supercars possessed. Some have even lost some of their original soul through downsizing of engines, the addition of automatic transmissions, and hundreds (and sometimes thousands) of pounds slowly creeping into the designs. The T.50 promises to rid all of this, and more. With only 100 examples available for the entire world, Gordon Murray’s swan song will be the definitive analog supercar. 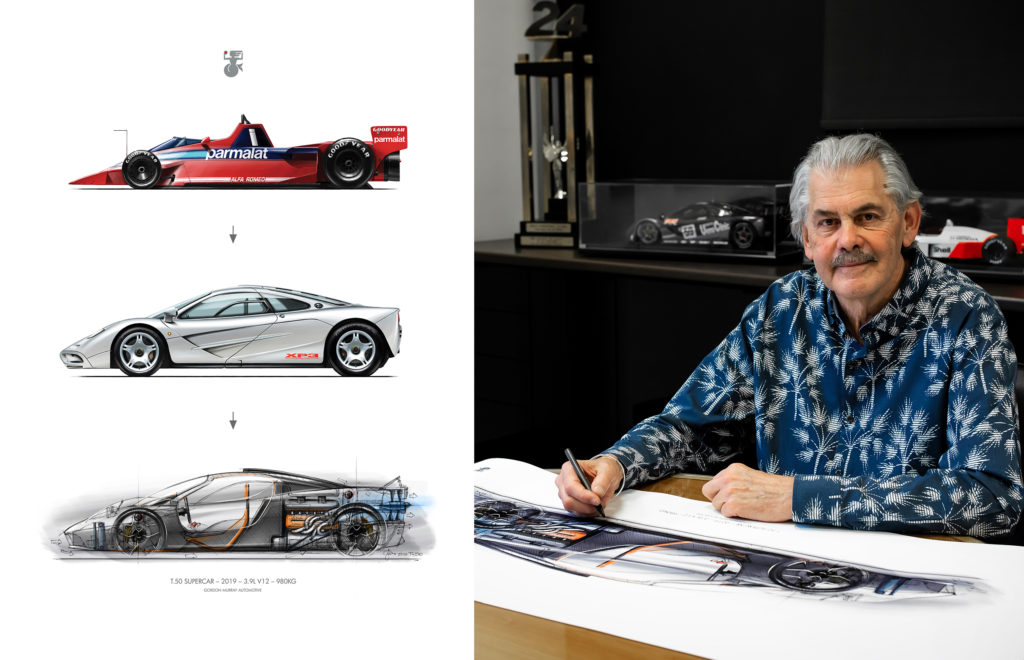 Gordon Murray’s vision of the ultimate supercar is clearly defined, retaining what makes a supercar a supercar. The most important aspects to Murray were distilled down to a number of components: a central driving position, lightweight, the best normally aspirated V12 ever made, new levels of driver involvement, an engineering work of art, moving the boundaries of materials and technology, ground-breaking aerodynamics, an iconic design, all while having no compromises whatsoever.

No supercar would dazzle without a set of astounding numbers, and the T.50 does not disappoint. The specifications of this limited-edition supercar are staggering. It’s bespoke 3.9-liter V12 engine designed by Cosworth develops 650 naturally-aspirated horsepower, with short boosts capable of 700 horsepower. With a stratospheric redline of 12,100rpm, the T.50 promises to send shivers down your spine as you hear the engine wail directly behind you, until you shift the bespoke 6-speed transmission and experience it all over again. Weighing in at a featherweight 2,161 pounds, the T.50 even bests Gordon Murray’s original McLaren F1 road car.

One of the most exciting features of the Gordon Murray T.50 supercar are the most advanced aerodynamics ever seen on a road car. One of Gordon Murray’s original designs, the Brabham BT46B F1 car, used fan-assisted aerodynamics in 1978. The McLaren F1 was the first ground-effects road car when it launched in 1992. The T.50 now moves these two ground-breaking elements into new territory, with active fan-assisted aerodynamics. Developed with a current Formula 1 team in a large-scale rolling road, the fan acts as a multi-purpose device, enabling cooling, downforce enhancement, efficiency enhancement, drag reduction, and downforce. The driver retains control of high downforce, low drag, top speed, and test modes.

Having consulted on the project in its early phase of concept and development, Bruce Canepa (Canepa Group) has been selected as the exclusive North American representative of the Gordon Murray T.50 Supercar.

Canepa is an industry leader in the collector car world; including sales, restoration and motorsports. Located in Scotts Valley, California, Canepa is central to the Silicon Valley and WeatherTech Raceway Laguna Seca. Experienced in premium luxury and performance vehicles, Bruce Canepa was deemed the perfect fit for Gordon Murray Automotive’s new supercar. As the sole North American representative, Canepa Group will handle all aspects of customer support for the new supercar from beginning to end for North American customers; including sales, importation, service/maintenance, and warranty. Interested parties are invited to contact Bruce Canepa at (831) 430-9940 or [email protected] regarding available build slots for the T.50.